This year, as the 10th Annual Gem and Jam Festival prepares to touchdown in Arizona – two extra special evenings of creativity and consciousness will be ushered in around California in celebration. On Thursday, January 14th and Friday, January 15th, the foremost artistic creators and psychedelic thinkers will join forces under one roof for two nights of epic proportion; first at San Francisco’s 1015 Folsom and then at the Belasco, located in the heart of Los Angeles.

From the moment the doors open, dancers, prancers and merrymakers alike will dive in feet first to the true ethos of the Gem and Jam Festival. A bohemian bazaar of vendors adorn the walls with finest wares, including some of the magnificent specimens you’ll find at the Gem show in Arizona, handmade festival wear and illuminated flow toys that they’ll be happy to show you the ropes on.

Prepare your dancing feet and head for a delightful treat as Simon Posford delivers a body moving, soul grooving DJ set as Shpongle, accompanied by Ott., Russ Liquid, Andreilien and Soulular. If one stage of music was phenomenal for the last Gem and Jam PreParty, then three are even better for this year! Los Angeles booty shakers and tastemakers the The A BUN DANCE stage features bass for your face from an-ten-nae, Mimosa, Huglife Music, Stylust Beats while The Cruz Coalition has curated a dance floor that focuses more on those four to the floor beats featuring Worthy, Sacha Robotti, IAMNOBODI, divaDanielle, DJ Loomer and RYBO

The multitude of music textures and performances are mirrored perfectly with live painting from the genius of visionary artists Alex Grey + Allyson Grey, among other local and festival circuit favorites like Sam Flores of Upper Playground, Amanda Sage, Gabriel Welch, Benedigital, Anthony Sirios West and Jef Logan.  Visuals for the event will be done by none other than the esteemed Johnathan Singer of Tipper and Greatful Dead 50 fame.

Calling All DJs and ProducersThe team at RE:CREATION LA has an amazing opportunity for those that fancy themselves musical inclined. For your first chance at fifteen minutes of fame, Gem and Jam style playing alongside some of the most sought after names in the festival circuit.

To Enter: Submit a Short Bio, Photo and Link to your best work to eventagency.redefine@gmail.com by Friday, January 8th at 12:00 PM PST.

The team at RE:CREATION LA will select their top 5 submissions to share for voting this weekend; the voting process begins Saturday, 1/9 at 12PM PST and will end Sunday at 12AM Midnight with the winner announced Monday Morning, 1/11.

For more information on the Gem and Jam Pre-Party in LA, visit the Facebook page here. 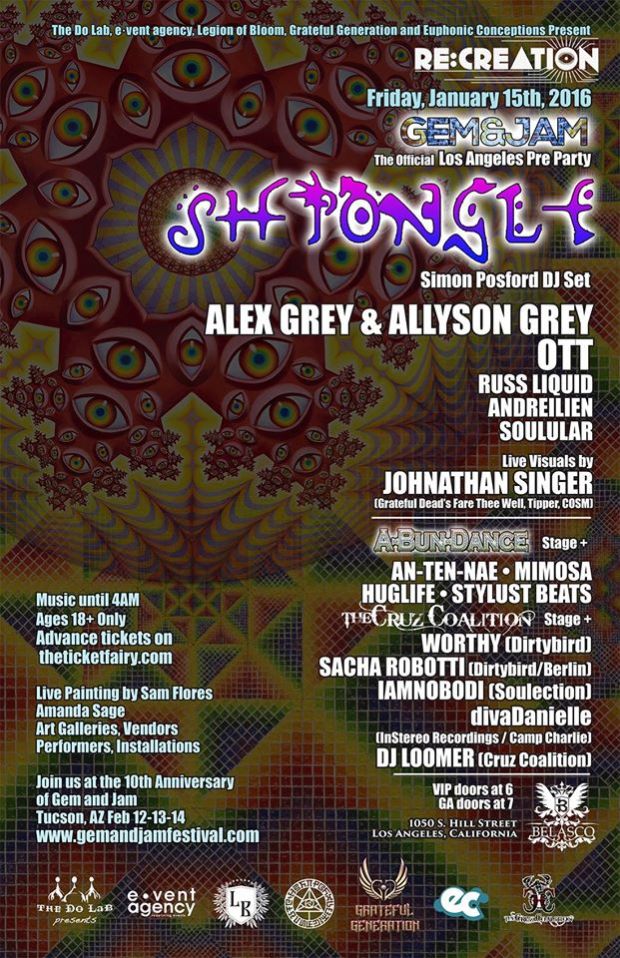 Not in California? No problem! Colorado will be hosting it’s own Gem and Jam PreParty at the end of January with Exmag, Defunk, and Mikey Thunder on Thursday, 1/28 at Cervantes’ Masterpiece Ballroom with headlinres Jason Burruss and Sassfactory in Denver and 1/29 at Hodi’s Half Note in Fort Collins with headliners iLL Banks and Jason Burruss.

More Details HereFor more on the Gem and Jam Festival itself, head to their official website and social media channels: