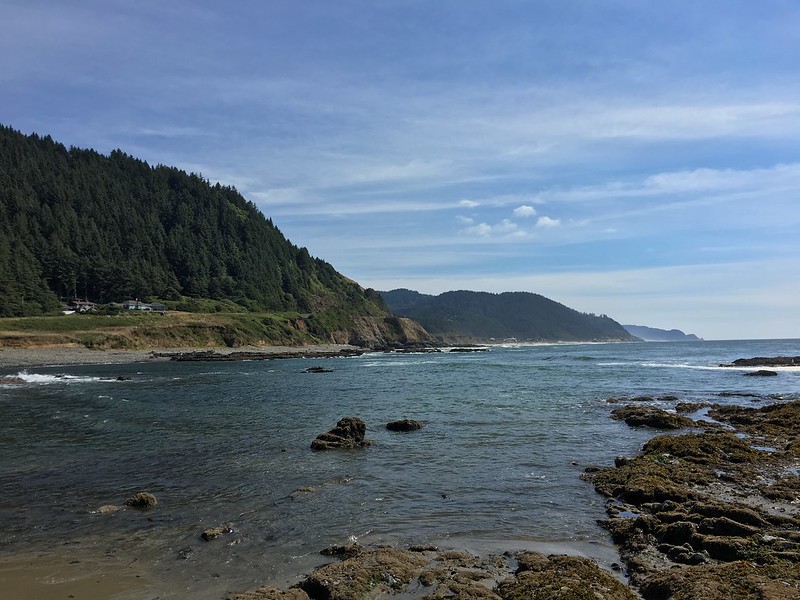 By and large, the best thing about living in California was the not just the proximity to, but vast amount of National Parks and National Forests within a stones throw.  From Southern California’s  Anza-Borrego  Desert State Park in San Diego to the Antelope Valley Poppy Fields, Joshua Tree and the Angeles National Forest up to Big Sur, Sequoia and the Redwood Forest of Northern California – the state is rich with magical nooks of nature and luminous landscapes.  But – I no longer live in California!

Last year at our wedding, Danny and I promised each other that within a year, we’d be making our way up through the Pacific NorthWest and into the wonderful state of Oregon. Like many good thoughts, it sat on a shelf of our minds that we would dust every so often with life changes, epiphanies and our growing love for each other. A few weeks ago, we realized that our time in California felt like it was slowly slipping from us. We wrote lists for pros and cons, rights and wrongs and then we realized: there will always be something to second guess, and hold you in place – there is beauty in calmness, but there is growth in chaos; there is no perfect time for your next big adventure, because the time will always – and forever will be – NOW. So, one year to the date of our wedding – we looked, and then we took a leap of love and moved ourselves, and the kitties, up to the wonderful town of Corvallis, Oregon where my father grew up and now resides again.

While we were living in Los Angeles, even though nature was just a hop, skip and a jump away – that hop, skip and a jump came at a cost: crowded roadways leading to overpopulated parks, where each nook and cranny was taken over.  Up in Oregon, it’s a horse of a very different color.  Just the other weekend, we took to the Emerald Coast, paying visits to Newport, Devil’s Churn, Thor’s Well and Yachats; up and down the beach, you could take in the coastline for miles and miles – and barely a soul was there to share it with us.  Traveling the beaten forest paths, we would run into a small group of family maybe every other mile – if that.  Not to mention, the Oregon Coast is what happens if you merge the majestic coastlines of Big Sur with the sprawling forests of Sequoia – it’s just that beautiful!

Nearly every beach boasts a bevvy of tide pools, full of technicolor sea anemones and itty bitty crabs.  Crawling over the porous coastline near of Yachats with Cape Perpetua in the background, Danny had a hunch that we were frolicking over a volcanic vein – a little bit of GTS later, and low and behold we were!  As if the sprawling landscape of the Oregon Coast wasn’t enough to make one feel infinitesimal it turns out, Cape Perpetua is a now dormant volcano, last active over 50 million years ago! Growing up, I had a favorite beach in Yacahats – Bob Creek Beach; my family would flock there from early morning to sundown, picking blackberries along the way.

Some of my favorite memories of being with my grandmother and her family involved skipping down to the shoreline during low tide and browsing the wares the ocean waves had brought us.  The beach itself is famous for its agate hunting, and combined with the idea that an old volcano slumbers sweetly nearby, it makes all the more sense. We came away with so many goodies, and I can’t wait to start including them in my crafts and jewelry up here!

When we weren’t up to our wrists and ankles snagging promising rocks and scoops of sand off the rocky shoreline, we were adventuring as far as we could see.  If there’s one thing you should know about me, it’s that I’m a sucker for a great reflection shot – and living in Oregon is going to be this kitty’s photographic dream. 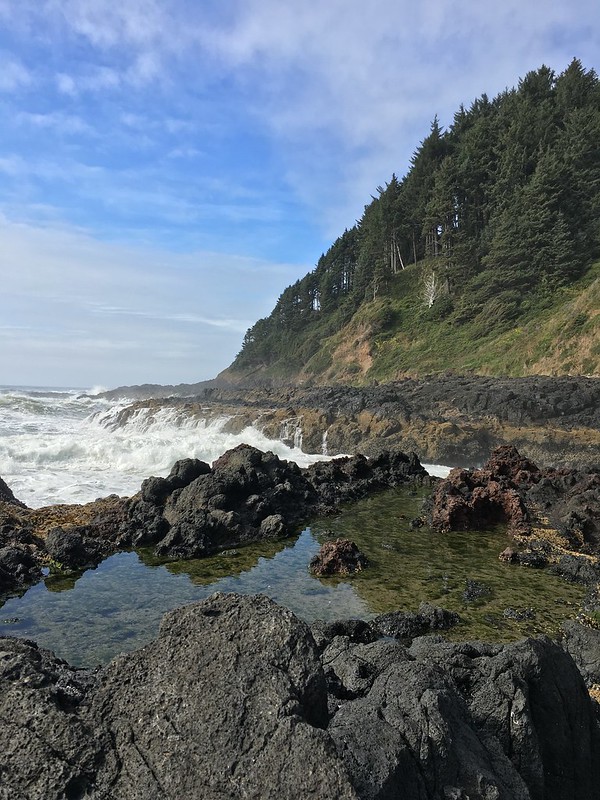 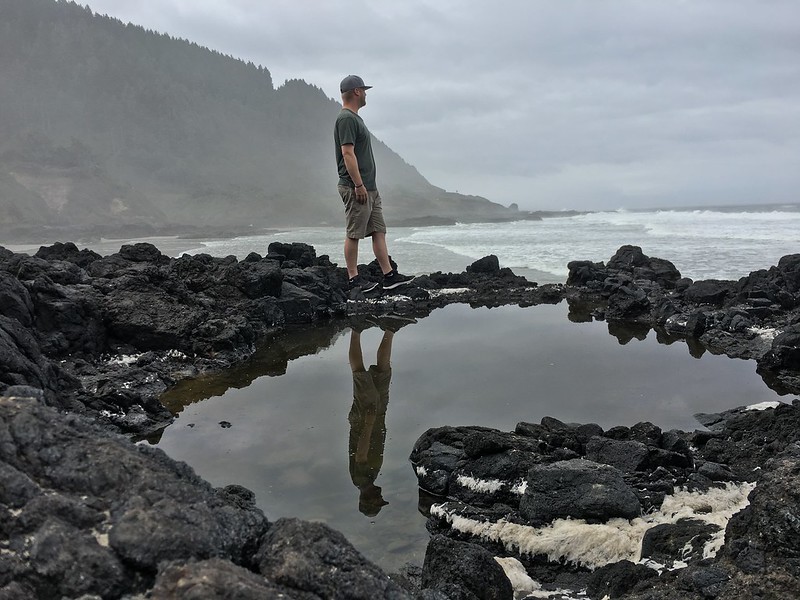 Another apt lesson that we learned is while in Oregon: if you want an adventure, go on an adventure; if you’re going to sit there and worry about the weather, maybe just move back to California.  The weekend we went out to the coast, the forecast was 60 and scattered clouds with sprinkles; good news, we didn’t actually check until we were already out there.  Instead of checking on the chances of rain or shine pre-trip, we simply packed for a weekend of whimsical weather where we took all the options into consideration: sandals, hiking shoes, sweaters, tank tops, swimsuits, the works.  It looked like we were leaving for a week vacation even though it was just a few days, and I’m proud to say that for once my overpacking worked in my favor. 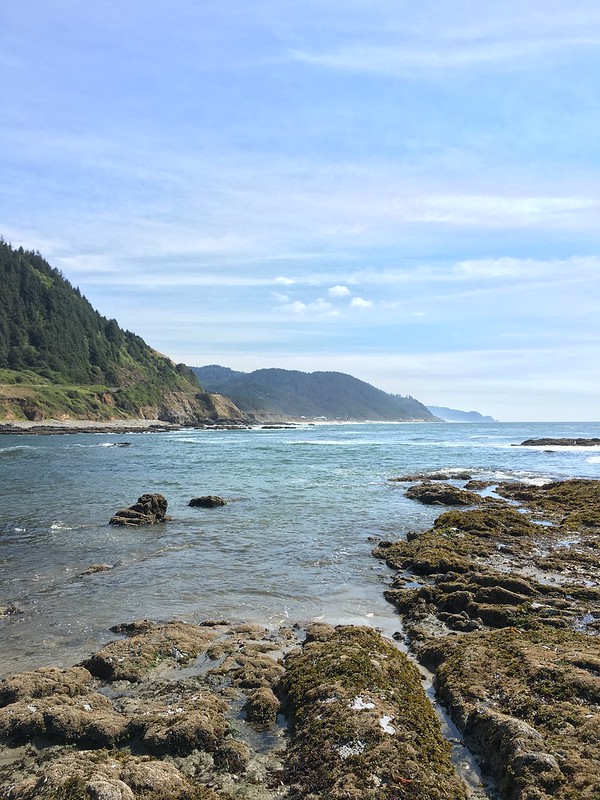 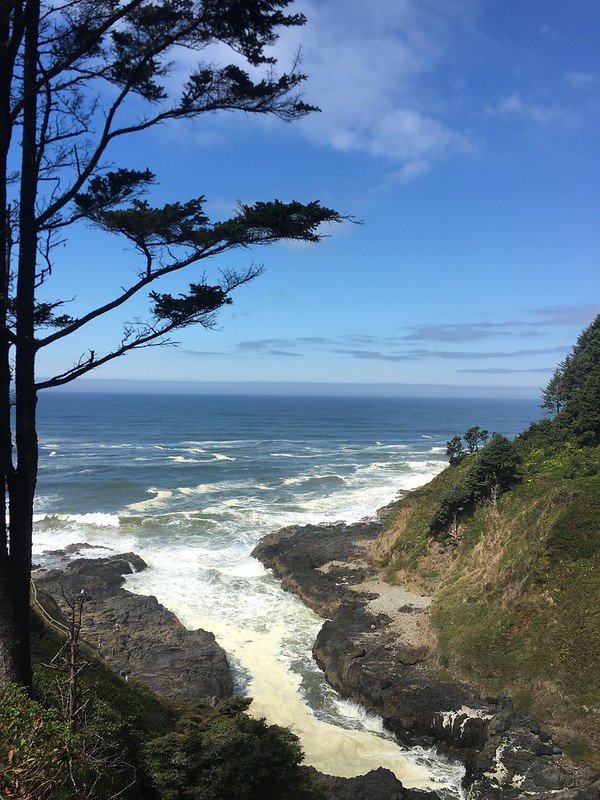 The first day on the Coast boasted salacious sunshine, only to be slowly overtaken by the marine layer during the evening, the next entertained patchwork clouds and a light mist, while the last was one of the most beautiful days I’ve ever experienced.  Clouds danced along the horizon expediently, taking shape after shape in front of our eyes and crafting eerie shadow pockets into the water.  Cruising over to Devil’s Churn, we could see the tide had overtaken the shore we’d been sitting on the day before, bouncing waves off the sides like a handball game of epic proportion.

As we gathered our things to head home, we had to make two last pivotal stops.  First, we were on a mission for some of the freshest fish and chips and oysters a kitty could eat.  Heading out to the coast where Highway 20 canoodles with the Pacific Coast Highway, the main town – Newport proper has an incredible arrangement of restaurants, including a personal favorite Local Ocean; but, we’re ballers on a budget and were looking for something a little more ‘hole in the wall’ – and let me tell you: we found it.  Just a little south of town, across the bridge and close to the Oregon Coast Aquarium, you’ll find the South Beach Fish Market.  Featuring fresh catches from the day, whole Dungeness Crabs and oysters as big as your face, we stuffed our mouths to the brim and kept our pockets full.

As we lingered longer, we realized we were in no rush to actually hurry home – so instead we kept our eyes on the Corvallis-Newport Highway.  Lined with thousands of shades of green on millions and millions of trees as far as the eye could see, Highway 20 contains a lot of little loops through the forest, into a land far more wild in Western Oregon than I’d ever seen, including unpaved roads and covered bridges that brought me back to the days of the Oregon Trail.  The scenic way seems to be the only way for me, and I’m very okay with that.

The more time I’ve spent in Oregon, away from highway interchanges, bustling crosswalks, and the dense vivacity of California, the more I’ve realized this is where my soul truly resides: somewhere lost in the forest, full of wonder.

What are some of your favorite spots of hidden nature? 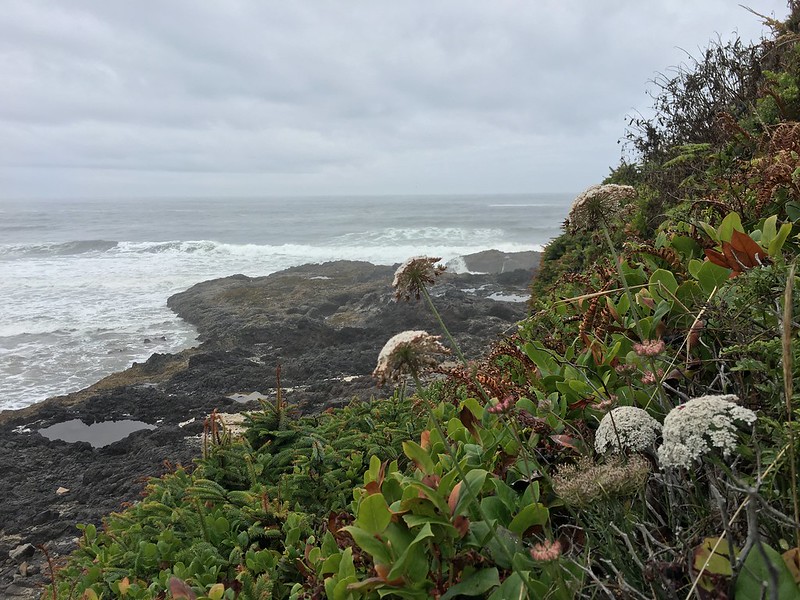