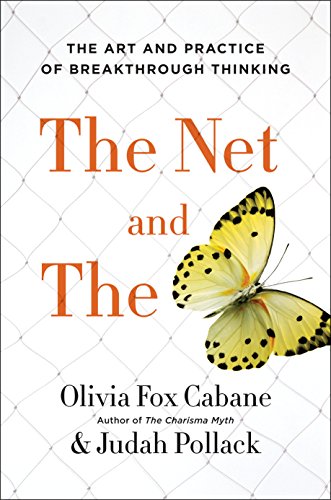 Oftentimes, the mind likes to play tricks on the heart, dolling out various forms of creative comas; for me, these generally come in the form of writer’s block.  Somewhere, in the back of my brain, I’ve deemed my sentences as pedantic, my metaphors aren’t juicy enough, my epiphanies aren’t anywhere near novel or the syntax resembles that of a kindergartners.   This is all fine and well if you’re not trying to make a name for yourself in the creative sector, or a living off of being a writer; but for the rest of us, well, that’s a horse of a very different color.

Enter: The Net and the Butterfly.

For all the times I’ve started a blog post and let it sit on the back burner, created a cover letter that I’ve then torn to digital shreds, or haven’t been able to put my finger on a press release, The Net and the Butterfly has released me from my anxieties of incomplete creativity and put me on the path for success. The brainchild of authors Olivia Fox Cabane, who penned The Charisma Myth, and Judah Pollack of The Chaos Imperative, this is perfect resource for any and every individual that’s looking to innovate their mental state and put a fresh spin on their success.

Whether you’re an entrepreneur looking for their next big break, or need a simple kick in the ass to get a project started – this is the book for you.  Take charge of your creativity and catalyze your inner momentum with engaging exercises, apt anecdotes to get your head spinning and solid solutions for whatever is sullying your sanity.

Hypothetically, you could finish this book in a single sitting – it’s wonderfully written and mentally probing, if you do it right; but by doing so, you’re  not doing yourself any huge favors, and you’re probably cutting corners by not marinating on the mental floss the book has given you. Pace yourself properly and really digest what you read by getting through one, maybe two, chapters a night and actually doing all of the exercises, you’ll be surprised by what works for you, and you’ll could be so immersed and enthralled in that new reality that you might just carry it over to your day to day life, maybe without even thinking about it. So whatever your vocation, or trepidation, is – The Net and the Butterfly posits some great knowledge and reignites the creative flame; and I’m speaking from personal experience.

For more on The Net and the Butterfly, head to the official website – or if you’ve caught the vibe and want more, snag your own copy on Amazon!

If you want to really hurt your parents, and you don’t have the nerve to be gay, the least you can do is go into the arts. I’m not kidding. The arts are not a way to make a living. They are a very human way of making life more bearable. Practicing an art, no matter how well or badly, is a way to make your soul grow, for heaven’s sake. Sing in the shower. Dance to the radio. Tell stories. Write a poem to a friend, even a lousy poem. Do it as well as you possibly can. You will get an enormous reward. You will have created something.”
― Kurt Vonnegut, A Man Without a Country

I need to preface this post with a teensy-tinsy blanket statement – but I wholeheartedly both stand by and believe in it:

Truth be told, there’s people that fall directly in the middle of this Venn Diagram of expression – and over time one can definitely migrate from one end of the spectrum to the other – but for the most part I believe there are those of us that re-purpose the artistic constructs of others to fit our lives and there are those that build them.

Being artistic can be applied to basically one field: the arts.  Dancing, singing, acting, painting, sculpting, modeling, etc, etc – they can all be made into collaborative mediums but at the end of the day, a dance is a dance and a song is a song.  The power of the creative mind is to take an artistic medium and apply what I like to call, the “fuck-it-all” method.

A painter gets his canvas and says to himself, “You know what you’re gonna do, you’re gonna paint a cityscape!” So, he grabs his trusty brushes and has it.  When the day is done it might not be a cityscape – it might be a masochistic panda, a whimsical forest or just dots on the page, but – irregardless – it’s still a painting.

The creative is the person that looks at that end result, and regardless of what it is thinks “Hey, this painting of (fill in the blank) could be a lot cooler if I broke it into pieces and assembled it back into a lamp shade.”  Bye bye old form, hello new function.  This is the essence of the creator.

As we grow older, our routines begin to present themselves and we become settled in both our way of life and school of thought – I believe the challenge we’re consistently presented with is how to both maintain the essence of the moment and, conversely, perpetually evolve ourselves.  And that answer is simple: art and creativity.

The biggest challenge the creative type faces is being pigeon-holed: we’re such free spirits that we don’t want no stinkin’ restrictions, even when it comes to a (theoretically) freeform field like the arts.  Just think about picking up an instrument – I’m sure with some coaxing, and deviations from sobriety, that one could pick up an instrument and play a basic tune, chord or scale.  No one expects to hear “Flight of the Bumblebee” but avant-garde noise, as close as some would deem it to dubstep, isn’t an actual genre.  It’s creative, sure; but art? Not exactly.

Light bulb Aquariums; what will they think of next?!

As much as we don’t want to admit it – all art tends to follow some form or function; I wouldn’t say it follows rules but it tiptoes where they deserve to be broken.  Creativity, conversely, blossoms from a world founded more on streams of consciousness and moments of inspiration than conformity.

As a community, as a culture – and even as individuals – we have a collective history creating and repurposing our art; a coat rack turns a purse holder, old CD-$’s become hanging room dividers and broken mirrors can mature into disco balls.   As different as each is to me – there are inherent similarities that one simply can’t shake: both processes require we open our minds to redefining failure.  Neither are perfect, and both are open to public – and sometimes, unpopular – debate.

The goal, for me at least, is to achieve a unique synthesis of both worlds; to fuel my passions as well as fill whatever voids I’ve created in my life.  There is nothing wrong with adding some structure to a world more reminiscent of M.C. Escher’s mind and alternatively, there’s no harm in arbitrarily throwing splatter paint on something with rigid form and bland characteristics.