I’ve always been an Android lover; in fact, I can’t recall ever wanting an iPhone….granted, I’ve also had Verizon Wireless for my entire life so I didn’t exactly have the option of getting an iPhone when it came out…but, I digress.   I’ve watched the Android market evolve and expand over the past few years, and I’m almost in love with what I’ve seen.  The OS has gotten sleeker, potentially even sexier – if you could call an OS sexy, that is. Though the phones have gotten larger in height x length dimension, they’ve also become thinner, lighter and with better quality resolution on the display.  Not to toot the horn for the HTC Rezound, but beepbeep: it boasts the first HD screen for a carried branded phone in the United States.  How you like them apples, Apple? 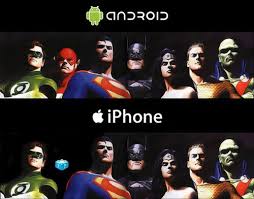 Now,  originally – one of the great things about the Android phones is the fact that unlike the iPhone – it contain(-ed) Adobe Flash.  I have to phrase it that way because Adobe has decided to discontinue its use after this November, and has started with devices that have already upgraded to Ice Cream Sandwich 4.1  One of the draws of having Flash was that you could view any web page in its full entirety.  But who needs fully supported web browsing when there are so many fantastic  applications for the Droid?!

Sometimes, it can feel overwhelming figuring out which ones you should download. Not to mention, how to handle re-downloading applications after upgrading to a new device. Well, first things first -in the Google Play Store you have the option to view every single application you’ve ever downloaded on your phone.  Simply go to the Play Store, toggle the Menu button (the middle left button on the bottom of your phone) to access the pop-up menu and you’ll have an option at the top called “My Apps“.  Click through and swipe your finger from right to left to see “All Applications.”

Now – onto the fun part, the applications. Some of these are pretty straight forward, especially ones for social media and some deserve a little bit of an explanation. The great thing about the Google Play store, is once your Google account is linked to your phone you can actually pick your applications out online in a more hunt and peck friendly atmosphere, and then send them to download on your phone.  It’s pure genius.

Hit the jump for my should have applications, and anything that is in italic or bold is a “must-have” – enjoy!

Social Media, the self explanatory section:

Games:  I try not to play games on my phone, but when I do…

One thought on “Tech Tuesday: An App a Day keeps the Doctor Away”