Video might’ve killed the radio star, but if the Buggles had a revival today we very well could be chanting about the triumphs of streaming media over cable television. Over the last ten years alone, movies, cartoons and computer games have evolved into television shows and syndicated shows have enticed prequels, sequels and spin-offs.  One of the cornerstones of the 90’s childhood – Boy Meets World – has been rejuvenated, and now Girl Meets World proudly airs on the Disney Channel.  Teenage Mutant Ninja Turtles was a cartoon, into a live action movie, back into a cartoon, etc, etc.  With the revival of older shows, and arduous endurance of things that I’ve always refused to care about like Soap Operas, Survivor, LOST, Maury and the lot – the only glimmers of hope I saw in that bleak black box were sports, like the Olympics or NBA, movies on FX and various bouts of HBO and Showtime’s catalog of epic Television.

So, when I moved into my boyfriends house this past April, I decided it was finally time to cancel my Time Warner Cable Account; and thanks to ample use of Apple TV, Netflix, Hulu+, communal accounts and streaming media – I’ve never had to look back. As of this past April, services like Grande Communications, RCN and Atlantic Broadband have offered Netflix on top of their regular cable service and earlier this year Time Warner struck a deal with Netflix to bring it to the boxtop.  Unfortunately, now that TWC has merged with Comcast – this transition’s been pushed back, possibly indefinitely. If you were born in the 80’s,  you-me-we‘re part of a unique macrocosm of the community that both remembers dial up modems and Network television with ants on the screen, and T3 lines with streaming content in real time.  We’ve spent the better part of our adult lives as entrepreneurs of the internet – skillfully navigating between the two.  Combined with our willingness to constantly ‘GTS’ (GoogleThatShit), we’re in general more apt to both search for and discover better deals for the media we’re devoted to. 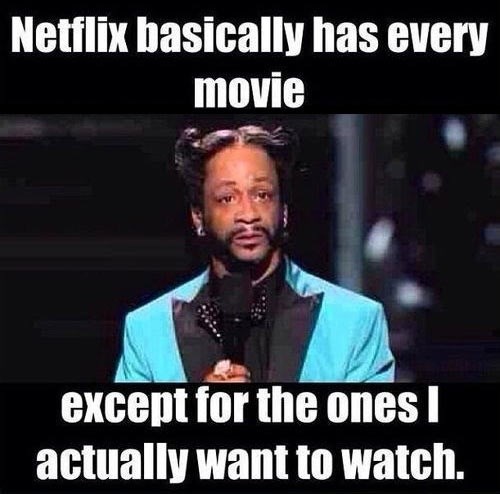 Conversely, with the way the current job market is, most of us simply can’t afford a full on Cable package either. So, over time – more and more of us have been converting away from cable.  To put it in quantifiable perspective, there are almost as many Netflix subscribers as there are Cable subscribers for my age group.  And after looking at the price break, it’s no wonder. Apple TV comes with a one time cost of $99, roughly two months of your traditional Cable.  And on top of that, Netflix subscriptions run for roughly $8 a month, same with Hulu+.  Add them together and you’re still  spending less than $20 for ample amounts of content! Netflix is becoming so big, that its even in the process of being added to Cable TV. As a good friend of mine always joked – if a little is good, more is obviously better. And when it comes streaming media, I happen to wholeheartedly agree. Between my parent’s AT&T Uverse Account, my Netflix account with a DVD option, my housemate’s dad’s HBOGO account, and his Hulu+ account – we have access to the same amount of content, if not actually more content, than the average bear.   Find a series marathoning friend and trade passwords, even better – start watching shows en masse; it’s so much more fun that way! Primetime stations tend to throw most all of their shows onto their website and when it comes to the news well – AppleTV has local ABC stations, as well as NPR.  Plus, it’s not like there was much real news on television anyways; you’re just as likely to catch a breaking story on Twitter or Reddit anyways.